We use cookies to improve your experience of our website. Find out more.
Okay
Free Next Day Delivery on Dog & Field Dog Food
Free Click & Collect from our shop in Harringworth
10% off your first shop Use 'welcome10' at checkout
Quality assured or your money back
Free Delivery on all orders over £40

This week we visited Lee and Victoria at the Breckmarsh Kennels to discuss our Christmas Plans.

While we were there we went out to look at Lee’s latest litter of pups and I asked him how he starts the initial training with them.

I was intrigued to see how Lee starts training his young dogs and hopefully pick up a tip or two. With many of us having brought new pups this year, including myself, a little one-to-one training from Lee was never going to hurt!

This is what Lee had to say:

“The training equipment you choose to use with your dog is a matter of preference really, but there are a few key items that we use at Breckmarsh Gundogs, which we find work well for a variety of situations and training levels.

1) Generally, we start with a tennis ball. We encourage our young dogs to retrieve a tennis ball with the emphasis on working towards a calm delivery. There are occasions during training, however, when an alternative to a ball, such as the Dog andField puppy dummy is useful to overcome problems. Some younger dogs will spit out a ball before you’re able to take it from them and they can tend to fumble with it and roll it along the ground. Before long their own game of flicking it across the floor, chasing it, picking it up and repeating these series of events becomes much more interesting than bringing the ball back into you. Using something else for the retrieve that the dog will be naturally more possessive over sometimes encourages a more committed hold.

2) When the dog holds the puppy dummy long enough, the ‘wings’ on the side enables you to grab onto something when taking it out of the dog’s mouth; with a ball it’s sometimes hard to take it quickly and calmly before it falls onto the floor and the dog starts to play with it again. You can take the dummy from the dog’s mouth without interfering too much; it’s also a useful starting point with young dogs that keep turning their heads away from you during delivery.

3) We progress onto using the 1/2 lb canvas dummy. It’s a hard-wearing dummy which can withstand long term use. We use this size dummy most of the time when working on the handling of both our Labradors and Spaniels. It’s not too cumbersome when throwing out for long marked retrieves and is a nice weight and size without becoming discouraging for the dog after several retrieves. For memories and blinds, it’s easy enough to kick a slight divot in the ground to stand the dummy up and thus make the dummy visible over a larger distance.

4) The 1 lb dummies are of the same heavy-duty quality and the increased weight prepares the dog for carrying larger game. These are naturally more visible, which can make them a better choice, for example, when sending your Labrador off your hand for a blind retrieve. An inexperienced dog will gain confidence and learn to trust your direction when set up to succeed by increasing the distances slowly and choosing a dummy that isn’t going to be hidden in the grass or cover. There are a wide variety of dummies on the market, but the canvas dummy is as versatile as you want to make it. For example, when you’ve got access to cold game, simply tape some pheasant wings to the dummy to get your dog used to feather.

5) The Dog and Field RRT canvas bird dummies are a great introduction towards progressing onto picking game. The dogs often fumble with pheasants for the first time because they’re unsure of the best way to grab and carry it. Often the wings get in the way and the dog will grab these instead of the body causing readjustments several times on the return. The Dog and Field canvas bird encourages the dog to pick birds by the body while getting used to the distracting head and wings. We’ve found that canvas is a great material to encourage the dog to pick something and it gives off enough scent for the dog to be able to locate it easily. There are rubber/foam alternatives on the market, but there is something about these that the dogs really dislike, perhaps the texture and the lack of scent that seems to be given off them. The RRT canvas dummy has a throw rope making it easy to throw over longer distances and there is a launcher version of this dummy which can be used in conjunction with the RRT dummy launcher.

6) We usually introduce fur later in training when the dog is more experienced, but sometimes if a dog has developed retrieving quirks early on with the canvas dummies and has become uninterested in them, the introduction of fur can work well. We’d use the Dog and Field fur dummy ball and then progress onto the 1/2 lb and 1 lb dummies; they are a great way of getting the dogs used to the feeling of fur in their mouths. When the dog is experienced enough to be worked where there is an abundance of fresh scent, the rabbit skin dummies are much more inviting to pick than the canvas ones.

7) We use the 210 ½ whistle for handling and the silent whistle while hunting the Spaniels. We use just the 210 ½ with the Labradors. We keep a couple of Dog and Field dog coats in the game bag when away training or at trials and have a spare slip lead in there too.

Finally, it’s great to have an array of dummies in your game bag to be able to apply something that will meet your dog’s specific training needs. Don’t be afraid to be a bit creative with what you have in your game bag; there isn’t one item that will overcome all the training hiccups, but you’ll get a long way by taking the time to understand your dog’s strengths and weaknesses. Keep trying something until you find what works for you and your dog.” 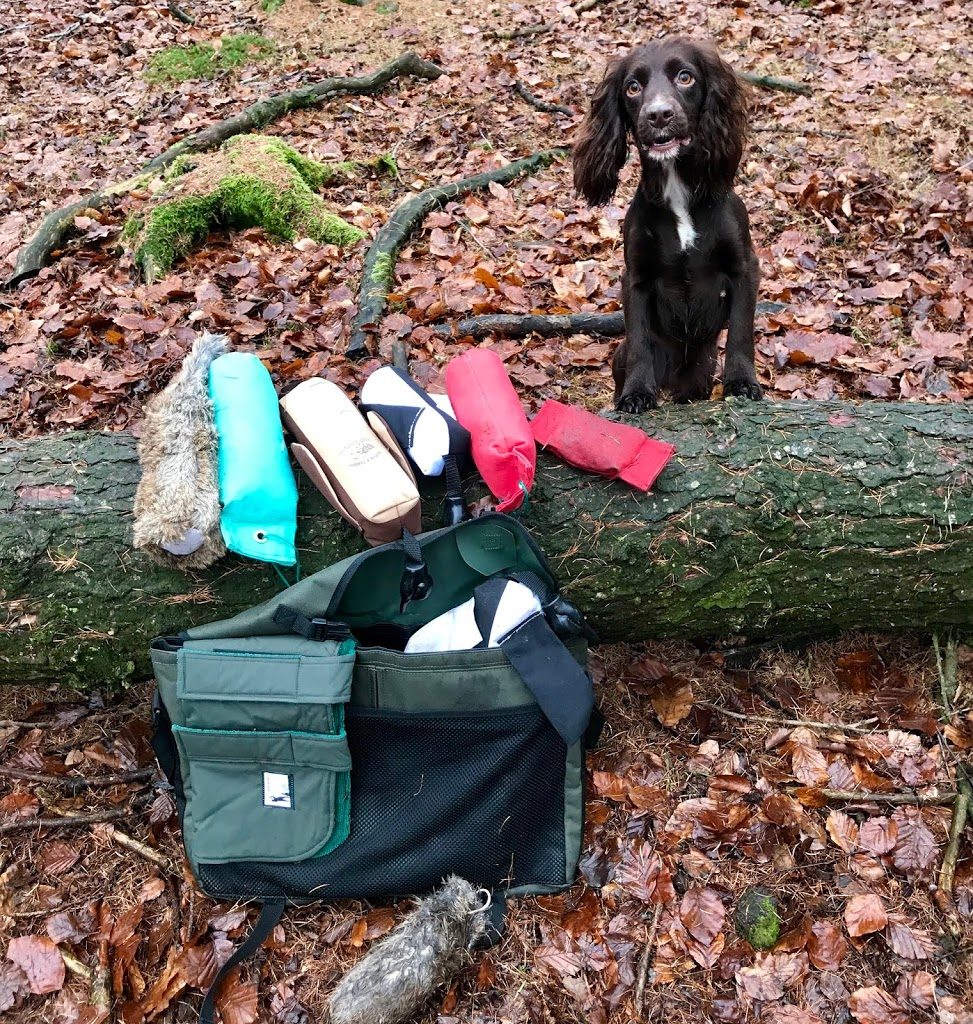 Everything you need to start your training adventure.
Furthermore, with it being Giveaway Time, You have a chance to win the whole kit!!
Find our Lucky 7 post on our Facebook page then
LIKE, SHARE and leave a COMMENT telling us why you should win
The Breckmarsh Lucky 7 Kit and we will add you to the draw.
We will announce the winner at 12pm New Year’s Eve!!!!!!

Thank you to the Breckmarsh Team.

Back to News & Offers